The Power of Community, Intention and Gratitude 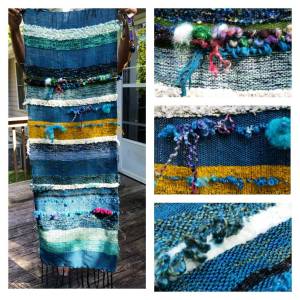 Over a year ago, an amazing student walked into my studio. She is bright and energetic and was searching for her “passion.”  She sat at the loom and immediately knew it was where she belonged.
Rita is an amazing weaver. Her pieces explode with texture and emotion. She always brings an idea to the loom and it’s wonderful to see her weave her heart each month. Soon after Rita started coming to the studio, she was diagnosed with cancer.  It became clear that she was going to have to reschedule a few of her  cherished sessions.   I knew how healing the power of weaving could be, as well as the seemingly unending appointments and sitting and waiting Rita was going through.  Then an idea hit me- I could channel the power of our weaving community to send love and intention to Rita.  I sent a message out to the Instagram weaving community, asking  folks to send a bit of yarn, with a note of healing wishes for Rita to use on her healing journey.  The response was overwhelming! 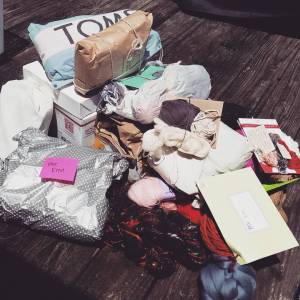 The inspiring weaver, Maryanne Moodie,  quickly reached out to me, and sent Rita a beautiful frame loom kit, complete with tools, a yarn pack and instructions!!!  This loom was the perfect size for Rita to take with her to appointments (it even came with a tote bag!!!) With  Sarah Neubert, who curates The Weaving Kind, we organized an official “Yarn Bomb” for Rita. Within a week packages started arriving from all over the world.  Each one contained special yarn, and a bit of kindness. 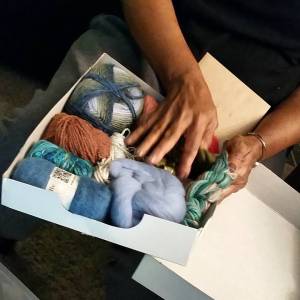 When I gave the packages to Rita- it was emotional. To say that Rita was surprised is an understatement. She was overwhelmed at the kindness of people she had not only never met, but who were encouraging her on her wellness and weaving journey.   Each package contained such beautiful sentiments. People chose to share favorite yarns from their stashes. Some even put together beautiful palettes, with an entire project ready to weave.  There are no words for the generosity I saw in those boxes.  And the notes!! These kind, beautiful notes of healing thoughts, prayers and wishes.

It’s been a long road for Rita, but I’m so happy to share that her cancer is in remission!  I am so thankful to this weaving community, who so lovingly opened their hearts and stashes to a weaving sister in need.  Rita has written a letter to all of YOU, that I want to share:

I WOULD MAINTAIN THAT THANKS ARE THE HIGHEST FORM OF THOUGHT, AND THAT GRATITUDE IS HAPPINESS DOUBLED BY WONDER”

This is a quote I had to read over and over and over to understand it. If not understand it, then to accept it. That was what I had to do with your cards. I was floored that you would display such kindness for someone you did not know. It was like angels embraced me because I’m a part of this community of creative, amazing and awesome weavers. In 2015, I found my passion in weaving and also found I had cancer. I’m not sure which impacted my life the most. I’m going to say the “weaving”. It allowed me to leave all my fears and worries at the door when I entered Esther’s home. She had repeatedly told me that there was a universe of angels who just happened to weave. My phrase going forward in my life is: “F..cancer” as one of you stated! For those who do not want the mantle of angel, then reflect on the power of strong individuals in the universe over time. That’s what you all are and I have learned there are no obstacles I can’t weave through. I so appreciate you all reaffirming this for me.
Sincerely,
Rita Harvard

So thank you my friends, and colleagues in this amazing community of weavers and makers. Thank you for sending your intentions and creating a powerful force of healing.  Thank you for proving that art and making- that creation and joy are an important part of our journey’s.