A couple of weeks ago I had a jam-packed week in Minnesota! I love coming to Minneapolis, and this trip certainly didn’t disappoint. Food, Family, Steven Berg, yarn..  what more could a trip ask for?

My week in MN started by joining my brother and sister in law at one of their favorite restaurants, Travail Kitchen and Amusements. This restaurant really focuses on local seasonal flavors and entire food experience.  They only serve a chef’s tasting menu, that ranges from 14-20 courses.  (ours was 20!)   It’s more than just amazing food.. (which it is, indeed one of the best meals I have ever eaten) but it’s the entire event.  There’s loud music (though not so loud that you can’t have a conversation) and lots of movement.. the servers move around to different tables and are very interactive, the chefs come out of the open kitchen to create the dish in front of you, and you walk through the kitchen to have the dish completed as you “walk through”.   At one point bobbing for meat happens of hanging hooks and there was even a liquid nitrogen trick!!
The deal is you don’t know what you are going to eat before hand, and their menu changes frequently enough that you won’t get the same thing if you go every few months..
To have the best time, you have to just make the mindset to try everything, and you might eat something new.  Before the meal begins you can give your server any strong dislikes and allergies, and they will tailor your experience to your palate to a certain extent. This was my first time with frois gras and salmon tartare.. both I would eat again in the right dish.

This was hands down one of the best meals I have ever eaten.  It was a lot of food.. but not so much that we had to roll ourselves out, and it was just enough food that we weren’t hungry.. even though some of the courses were just a small bite or 2.   I highly recommend going to anyone that will be visiting Minneapolis. It was $55 per person plus tip.. which for a meal like this would run upwards of $200 in cities like Chicago and New York.  Advance tickets can be purchased, or you can try to walk up (though walk up’s are not guaranteed to be sat.. in fact the night we went, our party of 3 were the only walk ups that there was room for.  Seatings are now staggered and start at 5:15 and run through the night.

The next day was set up at the Midwest Weavers Guild Conference.  I had a booth set up next to the infamous StevenBe.   We were a cacophony of color and texture and glitter..

I worked really hard on my submission for the Fashion Show. I wove SAORI cloth with handspun lights. I used reflective yarn and sparkle thread, along with clasp weft technique to create the starts shining over a city skyline.

After a wonderful weekend with the weavers, we moved the fun to StevenBe.  He was hosting a post workshop workshop day with myself, Franklin Habit and John Mullarkey. It was a great day of fractal spinning and the fabulousness that is StevenBe 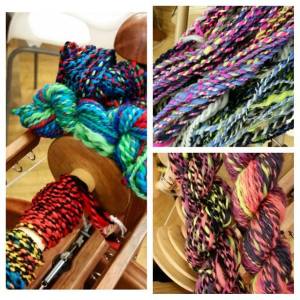 Finally, before heading home, I spent a day with my friend Chiaki O’Brien, who has the SAORI studio outside Minneapolis (SAORI FUN, Chasaka MN)  I have been wanting to learn to Bengala dye- which is a Japanese natural dye that uses iron oxide from mud as pigments.  I was joined by a couple friends and we had a lovely day of sharing SAORI, learning this awesome dyeing and general silliness.

As expected, it was a super fun week that flew by in an instant.  Plans are being made to return to MN in 2016 to teach at the Textile Center. I’ll post updates on my workshop page as they come in.   I meet you at Travail!